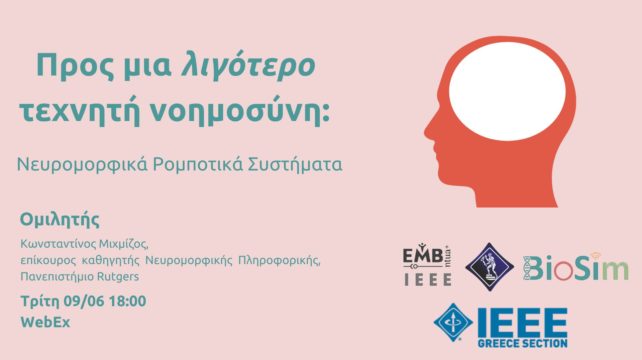 The IEEE Greece Section in cooperation with the Biomedical Simulations and Imaging (BioSim) Laboratory of the School of Electrical and Computer Engineering, the IEEE NTUA Student Branch and the IEEE EMB NTUA Chapter organizes a lecture on “Toward Less Artificial Intelligence: Neuromorphic Robotic Systems”.

Neuromorphic computing is the most brain-derived branch of AI that has just started to realize its promise for a highly efficient real-time interaction with real-world data. In this talk, I will present our contribution in advancing the neuromorphic research field into the mainstream of engineering. Specifically, I will discuss 1) our work on computationally capturing biological principles of intelligence that overturn our assumptions of how the brain computes and learns; as well as 2) our efforts to translate them in computational primitives, deploy them to neuromorphic hardware, and evaluate them in solving real-world robotic problems. Τhe overarching goal of the presentation is to suggest that this novel synergy of computational neuroscience, neuromorphic computing and robotics is a direction worth pursuing.

Presenter: Konstantinos Michmizos is an assistant professor of Neuromorphic Computing in the department of Computer Science at Rutgers University, NJ, USA, where he directs the Computational Brain lab. He is an executive council faculty member at Rutgers Center for Cognitive Science and a faculty member of the Brain Health institute and the center for Computational Biomedicine Imaging and Modeling. From 2013-2017, he was a research affiliate at the McGovern Institute for Brain Research, MIT.

Konstantinos completed his undergraduate studies in the department of Computer Engineering and Informatics at the University of Patras in 2004. He received a master’s degree in Biomedical Engineering, from McGill University in 2006. He then spent 4.5 wonderful years at the National Technical University of Athens where he earned his PhD degree in Electrical and Computer Engineering, advised by Prof. Konstantina S. Nikita. Between 2011-2013, he was a postdoctoral fellow at MIT, where he developed a pediatric neurorehabilitation robot under Hermano Igo Krebs and Neville Hogan.  Between 2013-2013, he was a postdoctoral fellow at the Martinos Center’s Magnetoencephalography (MEG) Lab, Massachusetts General Hospital, Harvard Medical School.

His research is supported by several corporate and federal agencies, including Intel and NIH.

If you are interested to participate, please fill the application form and submit it by 8/6/20!